Currently, COVID-19 has become a global scale threat to our health. Meanwhile, the situation in some regions such as China and Singapore has more or less become stable. To help everyone to be more aware of the global situation, and even hopefully contribute our possibly 3 cents to the intervention of this epidemics, we here calculated the time-varying reproduction number from time series of case numbers in each region on which we can get data and share it on this website. We will update daily when possible.

, which means roughly the number of new individuals will be infected on average by a single infector when there is no intervention at all, and the corresponding time-varying reproduction number

with possibly some interventions, are two important indicators of how severe is the epidemics and how effective are the interventions.

Here, we will provide first a time series of

for each region on which we get data, and we will also show some predictive results based on very simple and rough extensions, which will be explained in the following.

While working on analysis of COVID-19 data, we note that the effective time-varing reproduction number of imported cases (

) can be very different from the one of local cases (

) due to the different intervention policy for imported cases and local cases. Thus, we

Also, the test version of the modified EpiEstim has been provided at Github, and the manuscript on this new calculation will soon be posted on an arXiv website.

, we constructed two simple and rough scenarios to make some prediction,

of the two typical regions are decreasing functions since there is no data at the very beginning, and when there are data, usually there are interventions already.

When we connect for example

of a region of interest, we might encouter three cases. Firstly, if the latest value

is smaller than some values but at all values of

, we find the place

. Secondly, if the latest value

is larger than all values of

) and then again we let

. Lastly, in principle, there is a case where

is smaller than all

, but we have not see such a cases in real data.

The Null Scenario is like to ask that if nothing changes what will happen, while the Typical-Region Scenario is to ask when will happen if the region of interest learn from the typical regions and those learned interventions are exactly as effective as they were in the original region.

There are some limitations of the method. First, the scenarios are too simple to be realistic. Second, in many other regions, due to data limitations, we have not distinguished the zeroth, first, second and beyond generations of cases. The method is currently applied to a single-region model, where all the other regions are treated as exogenous variables. In principle, the method is readily applicable to a multi-region situation, where flows among the regions can be estimated via traffic data.

If you are interested in knowing more about our analysis before we publish the paper, here are some core formulea:

Here we choose China except Hubei, which is simply due to the lack of data at the beginning of COVID-19 in Hubei, and Singapore as the typical regions as things are more or less under control now in those regions, and also we have a relatively long time series for those regions. Since they will be used as the basis of prediction scenario, here we first show their time-varying reproduction numbers.

Typical region I: China except Hubei 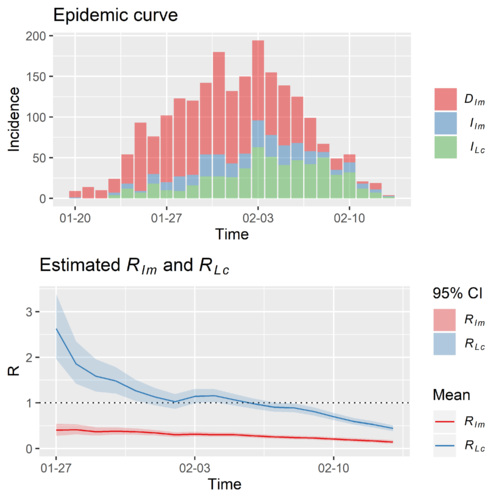 The time-varying reproduction number of China except Hubei,

are calculated saperately. Later, we will only make use of

, the blue line. We can see that it starts from large than 2.5 and it reaches less than 0.5 very quickly. The time-varying reproduction number of China except Hubei, combined

We should note that the combined

is very different from the saperated

Please contact us "the Safety Science and Complex System Team" if you want to make use of the data behind this analysis.

The time-varying reproduction number of Singapore. Due to the lack of better data, we only calculated the combined

. We can see it stars from a little over 2 and it reaches gradually to close to 0.5.

In this section, we will show the calculated time-varying reproduction number

of some regions. Again due to the lack of better data, we only calculated the combined

of both imported and local infectors. Based on the calculated

and the above known

of the typical regions, we also made some simple prediction of daily cases of those regions. 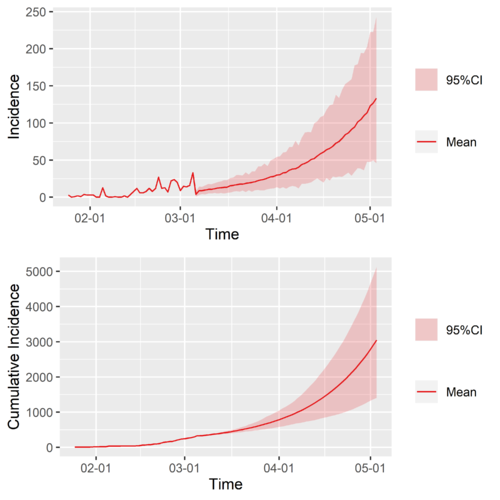 Null Scenario predictions of Japan. If the time-varying reproduction number of Jappen stays the same, this is what will happen. 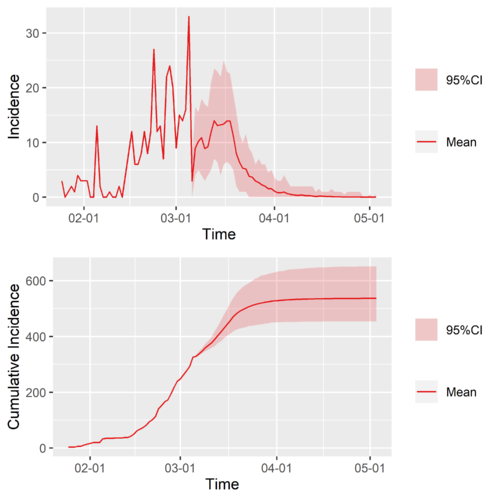 Typical-Region scenario predictions of Japan, based on Singapore. If the time-varying reproduction number of Jappen take the track of the one of Singapore, this is what will happen.